Witt Pit: The Best BBQ Joint You've Never Heard Of (that happens to share my name)

As most folks out there know, Texans are a proudly unique breed with our own distinct culture and set of traditions. And when it comes to Texan traditions, barbeque (or BBQ as we commonly abbreviate it) is near the top of the list. I've developed a distinct palate for BBQ throughout my years, and I've tried it all - good, bad, great, meh. And last week I was fortunate enough to discover a new BBQ joint that falls solidly in the 'gahdamn that's tasty' category. For all of you Houstonians looking for a fresh BBQ join to tickle the tasters, look no further than Witt Pit BBQ & Catering!

When I discovered that a BBQ restaurant bearing my own name - Witt - existed near my hometown of Houston, well my lunch plans had essentially been made for me. From Houston I made a quick 30 minute jaunt down to Witt Pit BBQ & Catering in Rosenberg, TX to see what it was all about. The establishment resides in a cozy old cottage complete with a screened porch, and when I pulled up I could sense I was in for a treat just by the look of it.

Upon entry, it's clear that you're in Texas; complete with wood-paneled walls, interior corrugated tin roofing, and numerous Texan insignia the decor is homey and inviting. As I approached the counter my first question wasn't about their variety of meats but the name of the restaurant. In 27 years I've only met one other guy named Witt (and a few other Whits...but that doesn't count), so I was eager to know the origins. Turns out that the couple behind the counter were Randy and Shaunna Witt - the proprietors of the joint who have spent many years in the catering business and opened this brick and mortar eatery in January of 2015. After a bit of small talk over our common name, I made my way to a table toting a hefty 2-meat 2-side platter. 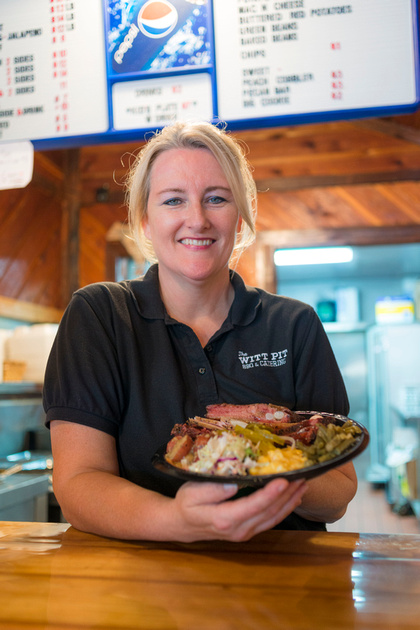 Shaunna Witt servin' it up hot!

As any good Texan knows, a BBQ joint ought to be judged on their brisket and ribs...and of course their sauce, if it's homemade. When I took a fork to my brisket it was clear that a knife wouldn't be necessary; it pulled right apart then melted in my mouth with the perfect amount of tender texture. And the ribs - even this picky eater can't imagine any improvements that could have been made there. Their in-house sauce was the icing on the cake, and the sauteed onions in it really set it apart from most others I've tasted.

Impressed especially with the brisket, I asked Randy if he had any secrets to cranking out such a tender and flavorful brisket. He chuckled and likened divulging his secrets to handing out the launch code to a nuclear bomb. He's got a point - that brisket was undoubtedly explosive, and he's got it figured out.

After putting my plate down the pipe and wiping off my mitts, Randy offered to take me and another interested patron around back and show me where the magic happens. The BBQ magic, that is. Behind the house sits a reverse flow wood-fired smoker that could easily accommodate enough meat to feed a village. Randy was pulling off a batch of chicken during the tour, and I wished I had saved room to give it a try...but that'll give me one more reason to head back that way for another meal.

There are countless Texas BBQ legends, and Witt Pit BBQ & Catering is surely one to add to the list. Having only opened its doors in January of this year, there's no doubt in my mind that the story has only just begun.

If you're in the market for some of the best BBQ in Texas with a down-home and personal touch (they also do event catering from what I hear), I highly suggest you pay a visit to Witt Pit BBQ & Catering!

You can also check out their website here: www.wittpitbbq.com

Below are a few photos I snapped during my visit 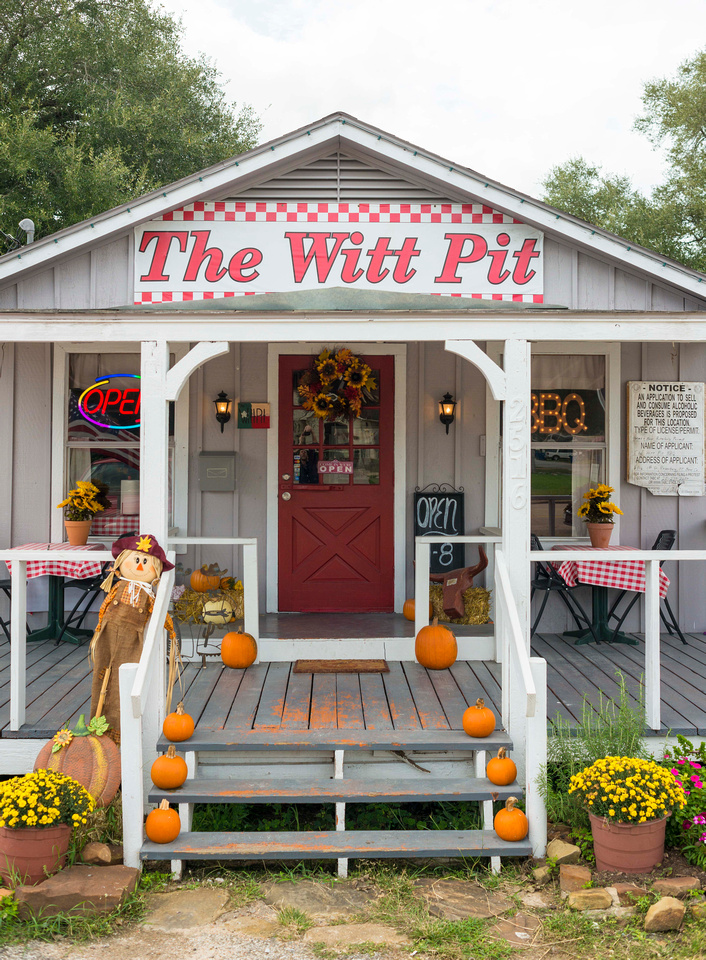 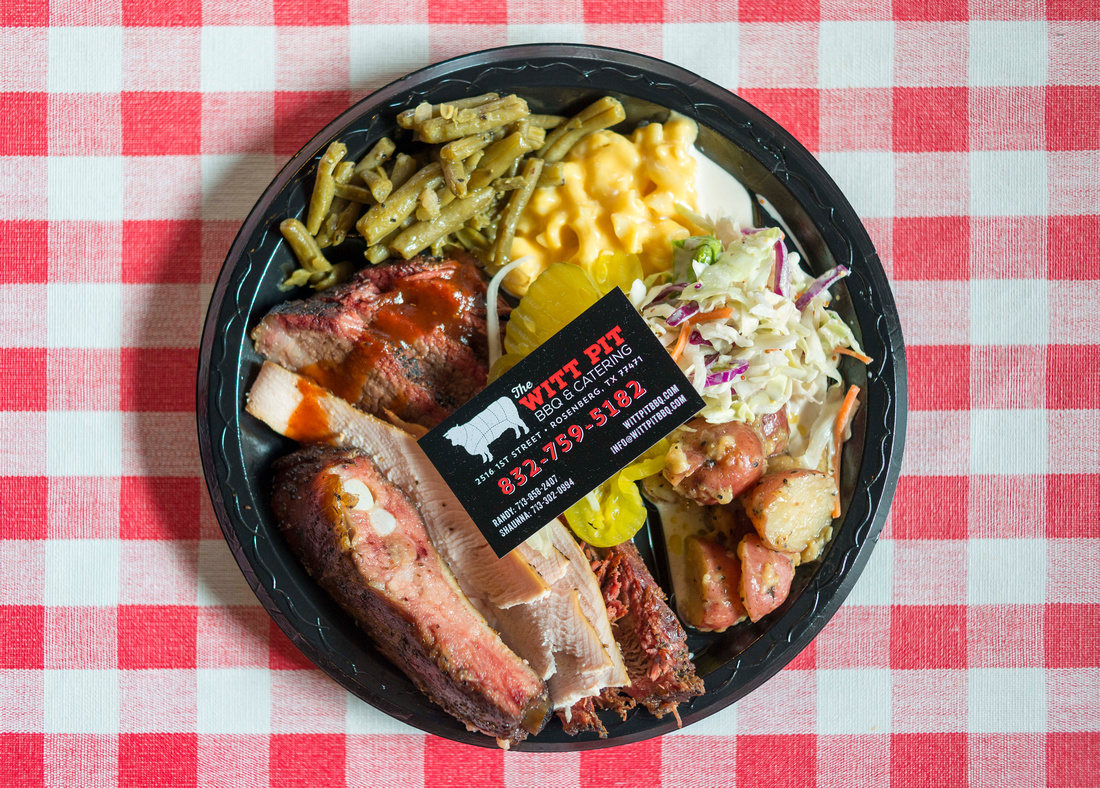 That's what I call a proper plate 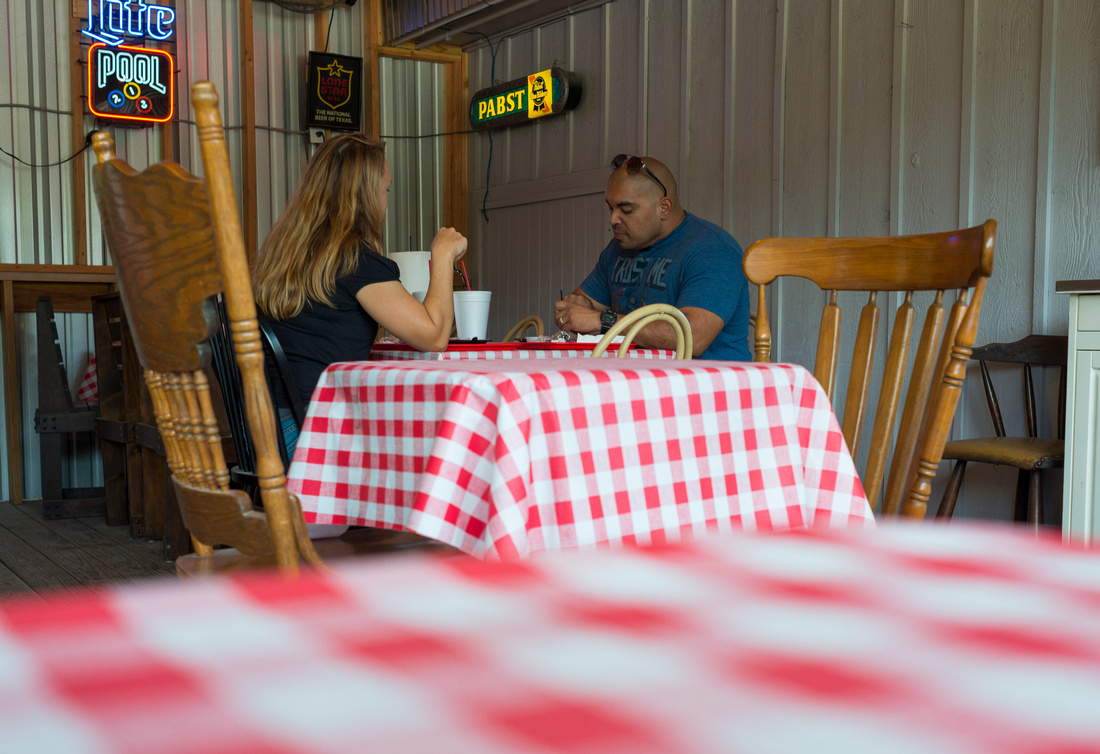 Eatin' on the patio 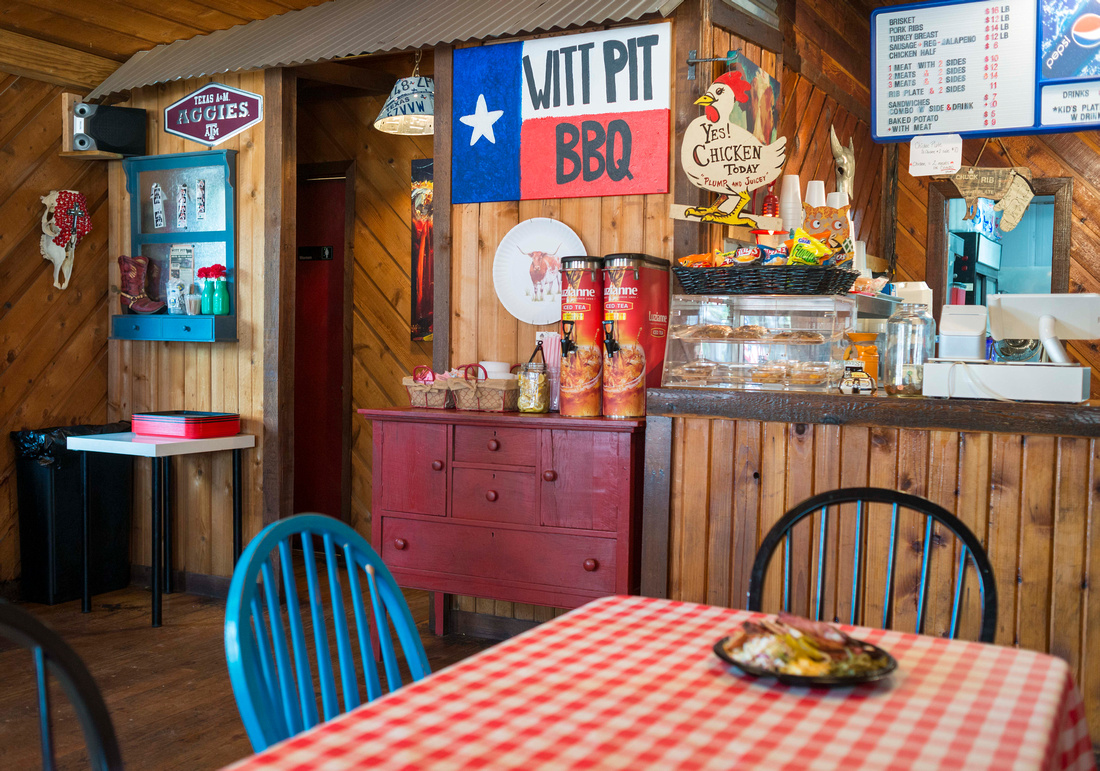 Their cozy interior boldly says you're in Texas 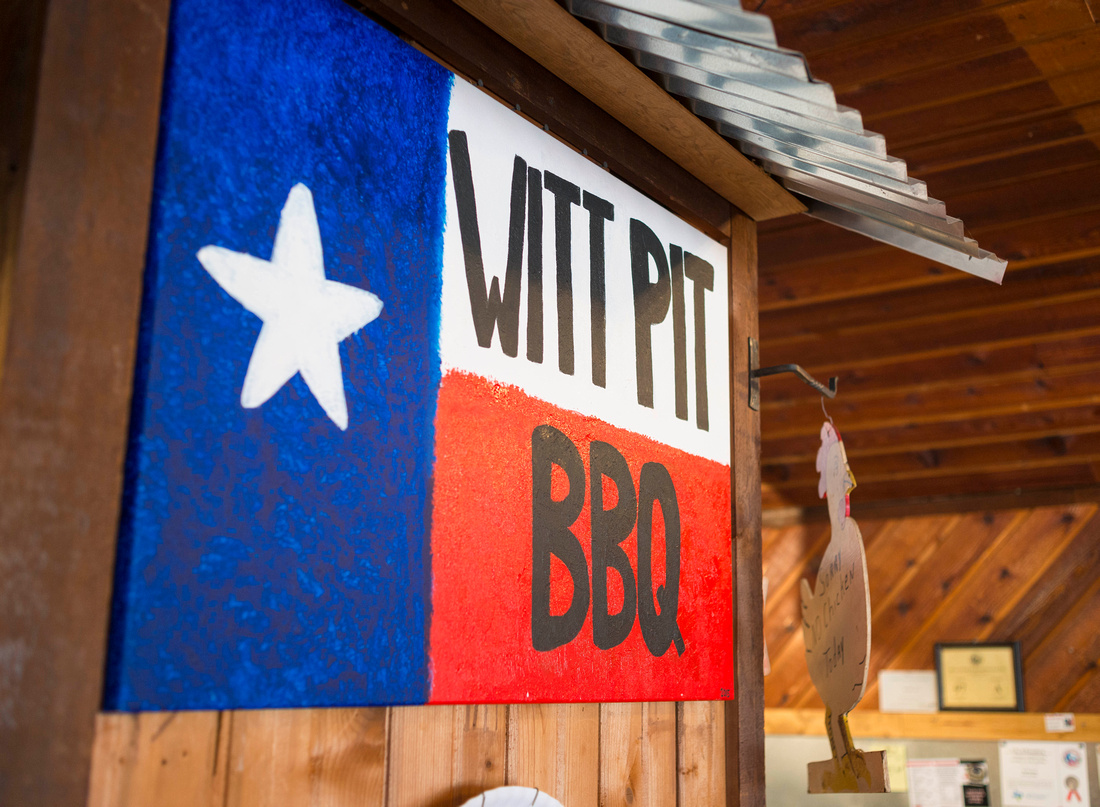 Their own spin on the Texas flag...I rather like it 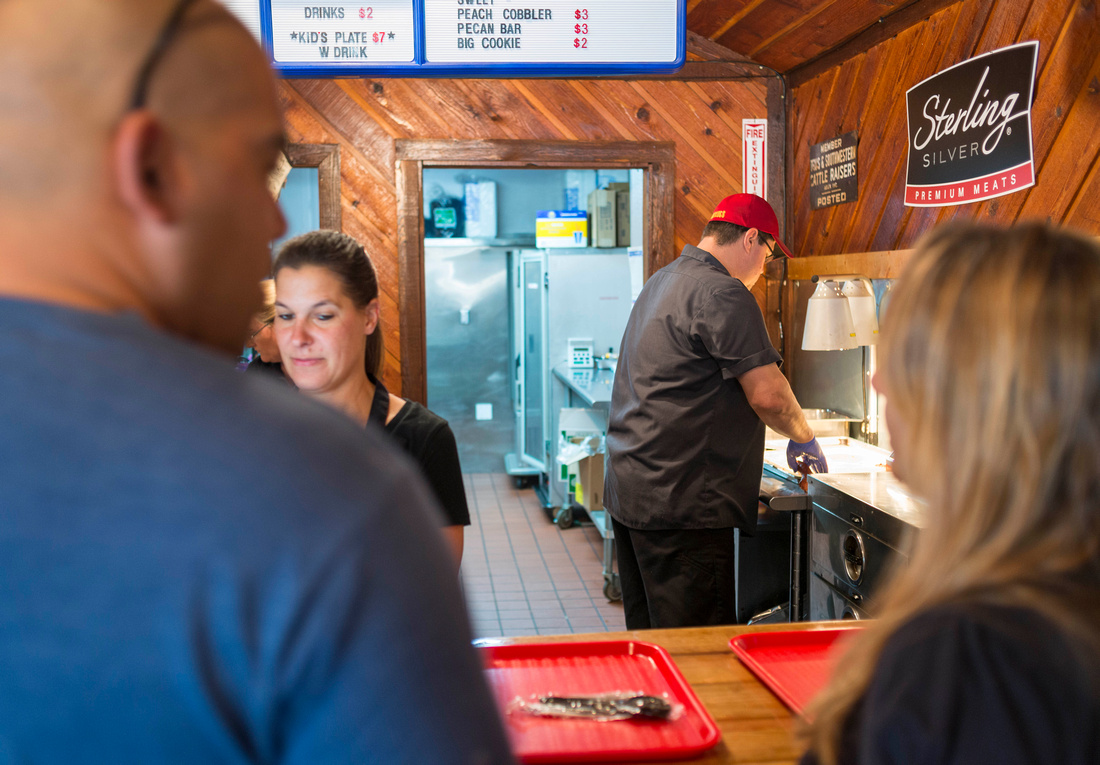 Two customers ready to have their taste buds rocked 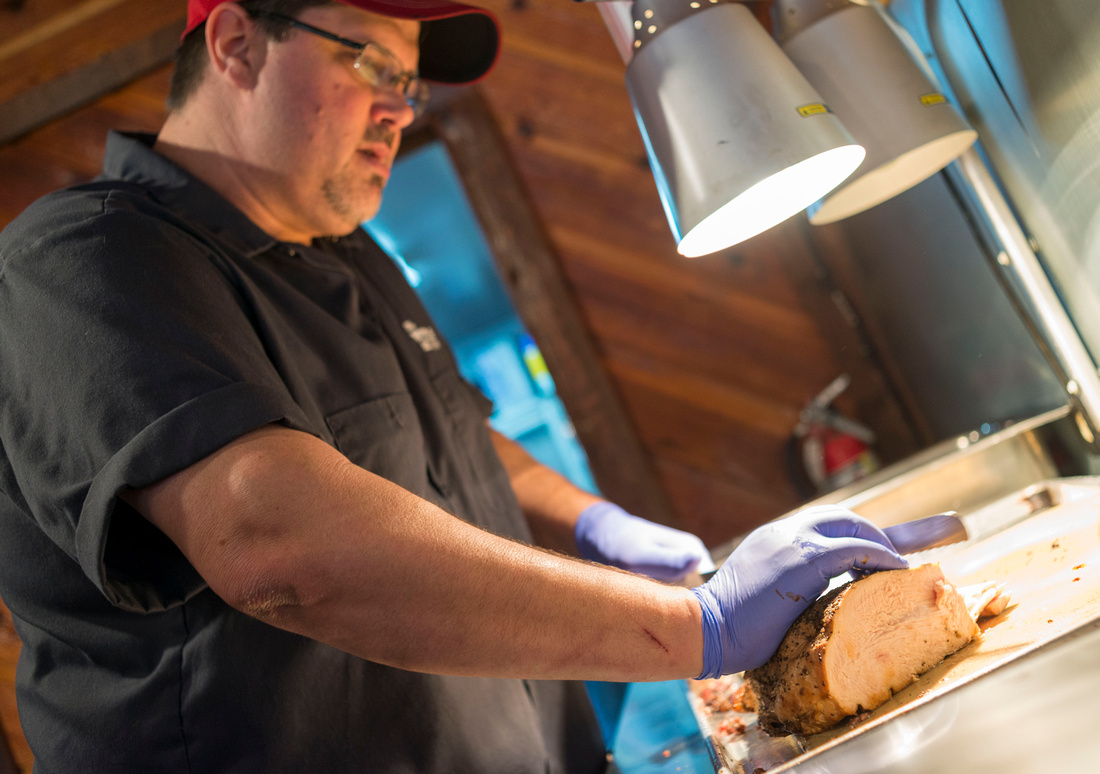 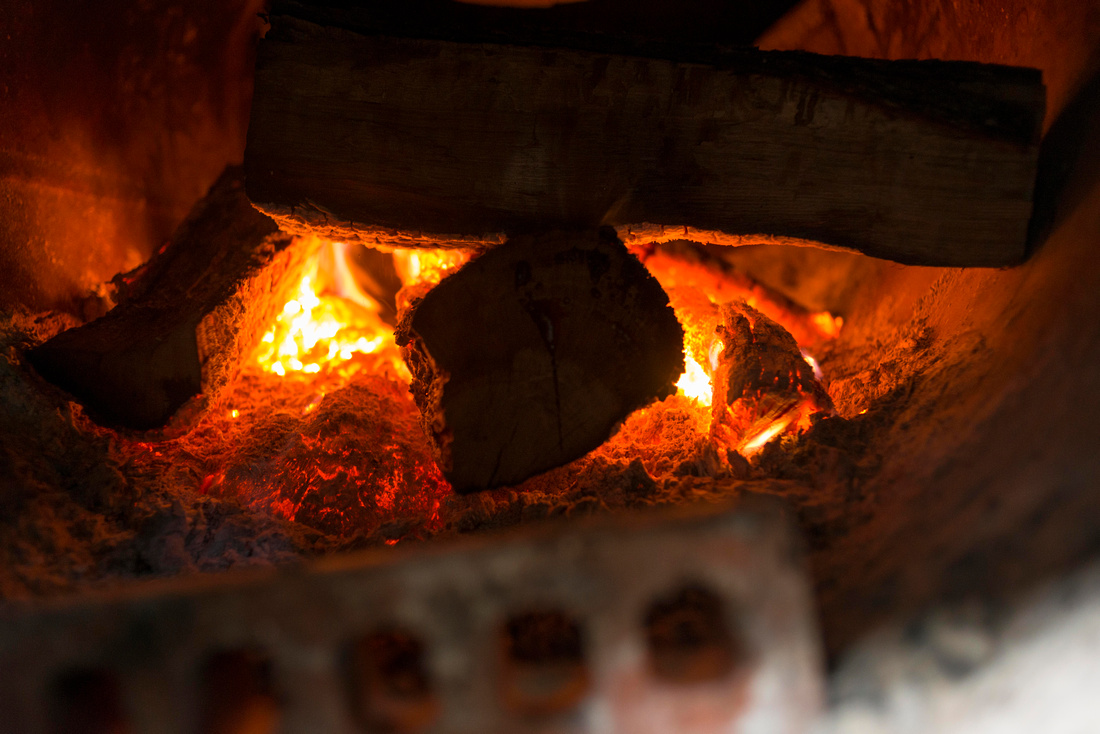 Randy Witt doing what he does best 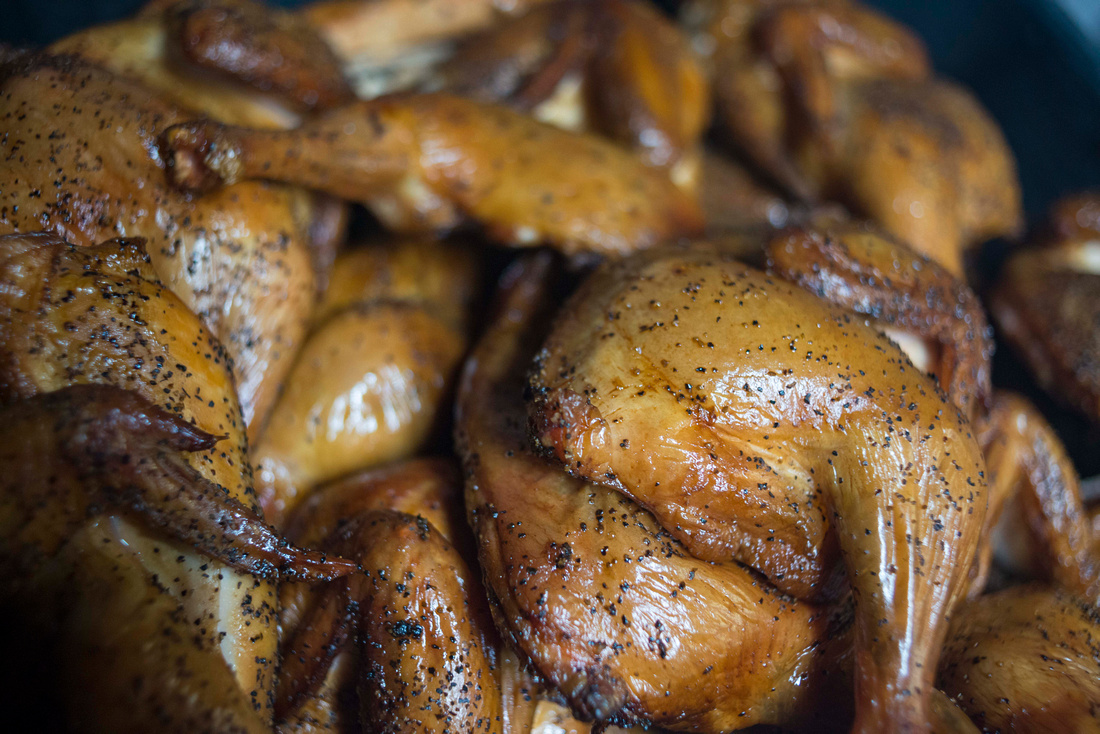 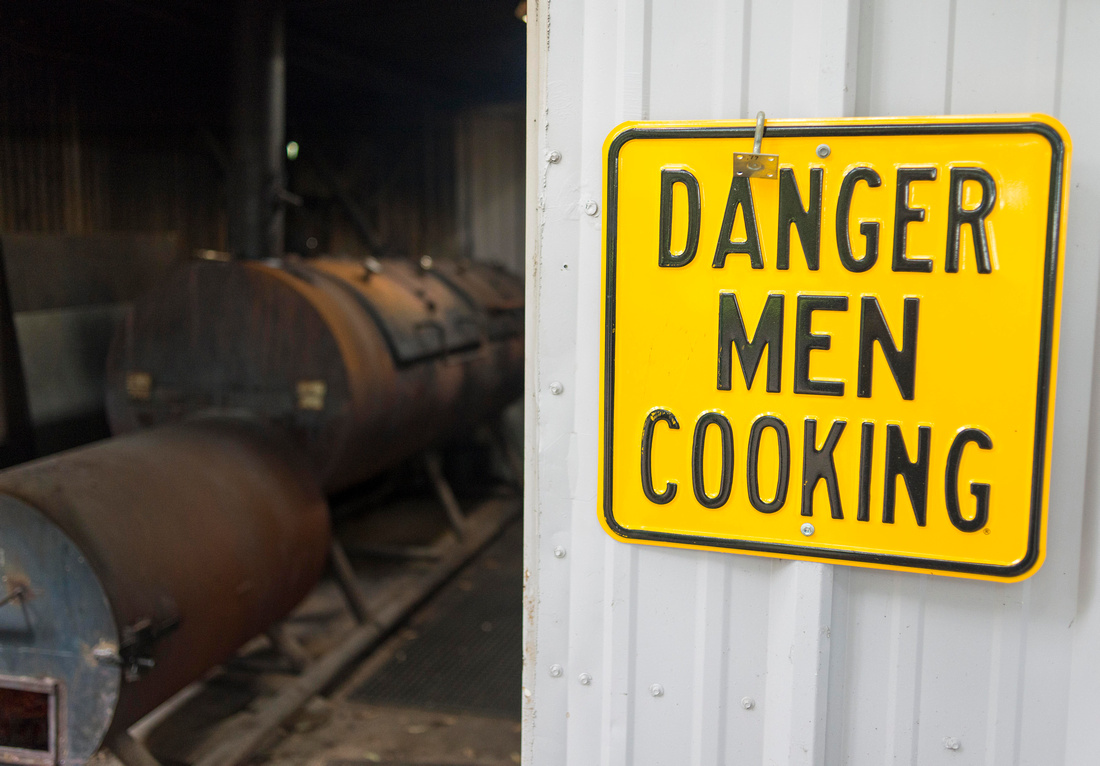 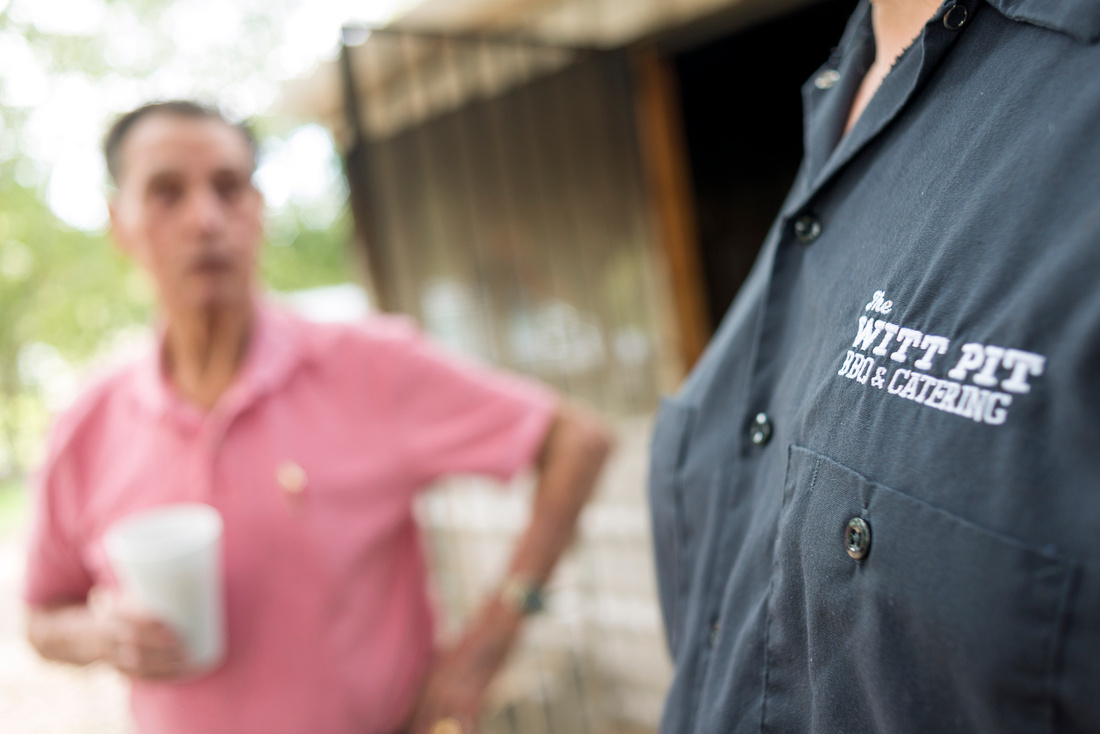 After a tour of the smoker, owner Randy Witt took a minute out of his day to talk BBQ with another patron and me

Deanna Clapsaddle(non-registered)
Witt's Pitt has great BBQ and is the best kept secret west of the Brazos River! Aside from having great BBQ and a cozy rustic place to eat, the Witt's are ardent supporters of their community and are involved at many levels for worthy causes. So blessed to have these wonderful people in Fort Bend County!
Courtney Spillar(non-registered)
Been enjoying the Witt Pit at LEAST once a week since May! I was having their Mac and Cheese and smoked turkey brought to me all the way to Dripping Springs! I haven't had anything that wasn't amazing! The BBQ baked potatoe is my fiancé and i's favorite to share!!
Shaunna Witt(non-registered)
We are honored that you chose us as your blog subject this month. Thanks for the drive out to Rosenberg and for so perfectly sharing our story and capturing all these amazing images ...you are so talented, It must run in the Witt Family LOL!
Head on out the Witt PIt anytime for that Chicken Plate on the house !
No comments posted.
Loading...
Subscribe
RSS
Recent Posts
All New Travel Photos Aerial Gallery Now Live The Photographer's Guide to Trekking Everest Base Camp The Real Ha Long Bay Inside Hanoi: 10 Tips for Photographers Recap: June 2016 Photo Safari Recap: Heart of Tanzania Photo Safari Witt Pit: The Best BBQ Joint You've Never Heard Of (that happens to share my name) Choosing the Right Lens(es) for a Photo Safari Battle-Proofing Your Tripod
Archive
January February March April May June July August September October November December
© Witt Duncan
User Agreement
Cancel
Continue