It's the dawning of a new age on wittduncan.com; great things are coming. What sort of things, you ask?

Blog posts from yours truly - filled with photos, stories behind the shots, and tips that'll have you out there capturing stunning images of your own!

A picture may be worth a thousand words, but images cannot speak for themselves. And that's what this blog will be dedicated to: providing insightful context behind the images contained within my galleries.

If ever a post leaves you with questions, ASK! That's what we're here for. (see the comment button at the bottom)

We'll start things off proper with the story behind one of my favorite images - dawn at beneath the iconic Torres in Chile's Torres del Paine National Park (TDP). If the location doesn't sound familiar, that's because it's at tip of South America in a region that straddles the border of Argentina and Chile known as Patagonia (it's not just a clothing brand). 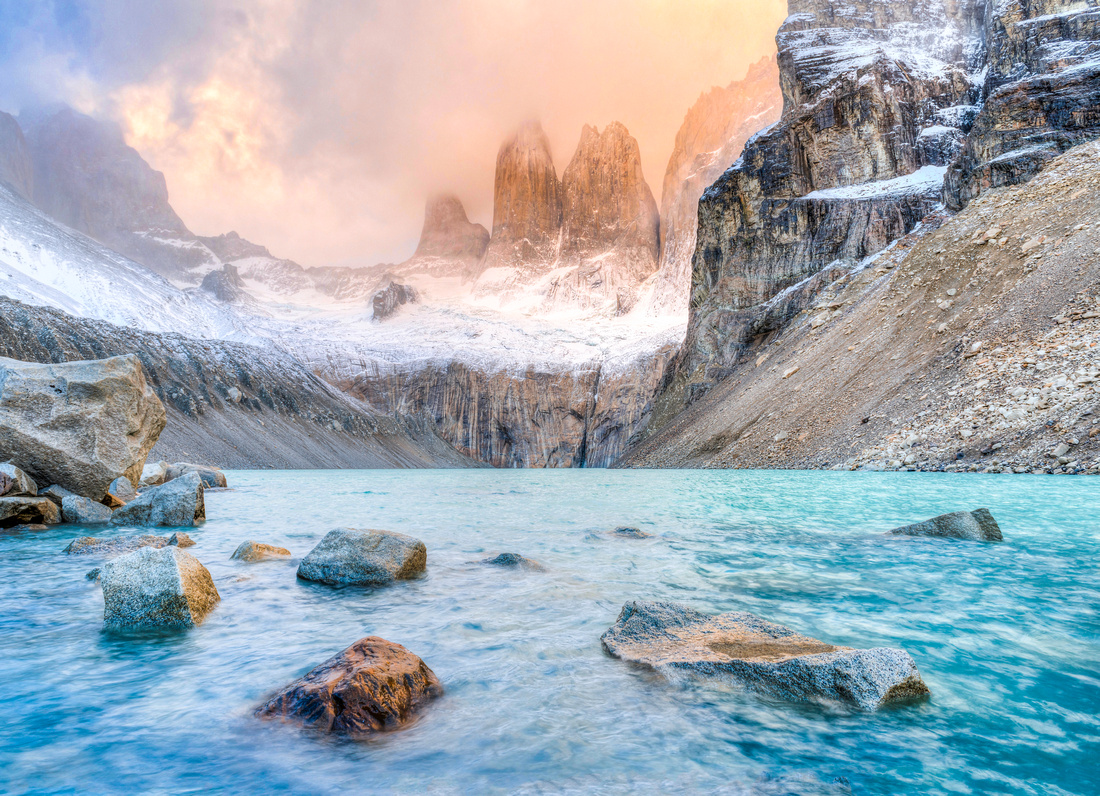 Yep, that's the place right up there. The park is aptly named after these three hallmark features that extend toward the heavens. And that's not to write off the rest of the place - it's all pretty spectacular. This photo was taken early in the morning on the last of 5 days spent completing the W Trek. Having seen photos similar to the one above, visiting TDP had been on my bucket list for quite some time. But once you hop off the bus and onto the trail the paradoxical nature of the place becomes immediately apparent. Its beautiful looks convey a peaceful and serene essence, but TDP is in actuality a fierce and harsh land. Unforeseen downpours stampede in on a nearly daily basis along with gale-force winds that toss beads of rain against you so hard that they feel like ice. Simply put, it's an unforgiving landscape full of sights that make the adverse conditions make it more than worthwhile.

Capturing the image above came with its fair share of challenges as well. After a full day of hiking, we set up camp at Campamiento Torres (Torres Camp) which is nestled into a fern-laden forest in the valley below these three shards of rock. Having been itching for years to lay my eyes on them, another hour and ~1,500 vertical feet of steep, rocky hiking up to Mirador las Torres didn't sound so bad...even though it was foggy and raining. Maybe I'd catch a break and be the only one up there for a killer sunset. So I loaded up a light pack, strapped on the rain gear and set out with high hopes. But I wasn't so lucky. After making the slog up I spent the next two hours huddling under a boulder in the cold rain without so much as a glimpse at the Torres; they were covered in fog. As the sun set without casting a single color into the sky, I packed up and plodded back to camp to scarf down a warm meal, chat with other trekkers a bit, then retire early to wake up and do it all over again.

Come 5 AM, the iPhone robot tone (so annoying that I have no choice but to get up and turn it off) rattled me out of my warm sleeping bag and into the cold, dark morning. After fumbling with my camp stove, lit only by headlamp, to make a cup of coffee I began retracing the slog up to Mirador. I was the first person on the trail that morning. The beam of my headlamp, snowflakes drifting down through the light it cast at the path ahead, guided me toward the silhouette of the valley's edge.

Light was still faint by the time I reached Mirador and clouds hung low, as they had the night before. But I danced through the boulder field, looking for an ideal spot to frame the Torres, hoping the warmth of the sun would lift the clouds enough to provide a glimpse of what I'd travelled thousands of miles to see. I hopped onto a boulder in the water and set up my tripod as low as it would go...waiting. By this time, a few other folks had trickled in to the area, but I had my spot claimed. I liked this vantage point because of the rocks that lay between it and the Torres, which I would use as foreground elements to draw the eye into the scene and provide a more engaging composition.

After testing camera settings and continuously wiping condensation off my lens, the scene finally began to reveal itself. Warm morning light began to pour in above, and the Torres were clearly visible. Because cameras do not see the world like human eyes do - I'm sure you've all seen something, taken a picture of it, then been frustrated because your camera cannot convey the scene as your eye saw it - we must use tricks to capture all the information available in the field in order to translate it in postprocessing into a scene more similar to what our eyes saw. In this case, I bracketed 3 exposures - a base exposure, one underexposed (to capture highlight definition), and one overexposed (to capture shadow definition).

The below three images are the bracketed RAW files I captured: 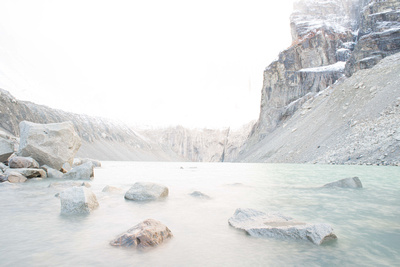 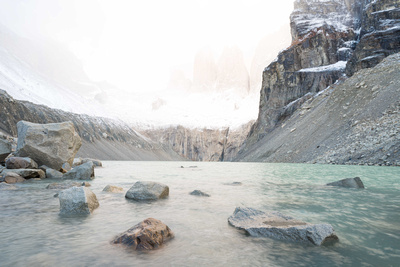 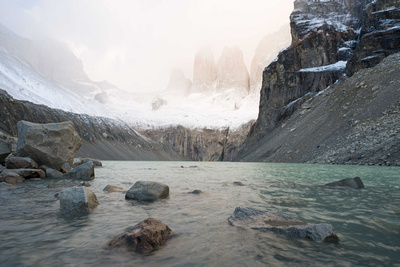 All of that for only three images? Yep - that's the name of the game. The means to the end are much more than the simple click of a shutter (or in this case 3 clicks of the shutter).

On first glimpse, the look nothing like the final image above. And that's the nature of RAW capture; the images contain much more information that a standard JPG but look flat and unsaturated without proper processing. After getting the memory cards safely back to the States I processed the RAW images in Adobe Lightroom then compiled them into a single high dynamic range (HDR) image in Photomatix. Essentially, this method uses algorithms to pull information from each of the images to bring detail into the light and dark areas and achieve an end result more like what you're able to see with your eyes (or a garish, oversaturated misrepresentation of it - depending on how the software is leveraged). Once the HDR was compiled, I brought it back into Lightroom to refine the look; this is a definite oversimplification, but we'll talk more about postprocessing techniques in later posts.

As the sun rose higher, harsh light poured into the scene, and it was clear that the ideal moment was indeed fleeting. But I had toughed out the cold, snowy morning to be there for it. And it was all worthwhile - the early bird got the worm.

Knowing that I had captured an image my minds eye had for years sought after made the hike back down to camp a breeze - and I'm sure the warmth of the sun and companionship of good friends helped too. 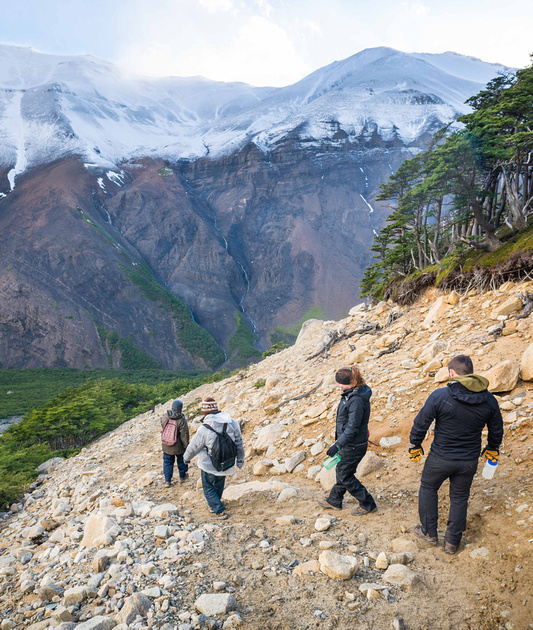 We'll end it on a high note this go-round. Til next time - cheers!