The Painted Churches of Texas

After having visited my family's ranch near Schulenburg, TX for my entire life I have long been vaguely aware of the painted churches that stand in the surrounding countryside. Recently I finally made the time (yes, after 26 years) to visit a few of the painted churches, and I can't believe I let so much time go by without paying them a visit.

What is a painted church? These churches, most built around the turn of the 20th century by German and Czech immigrants, are rather unassuming on approach and appear to be no different from any old single-steeple country church clad in white frame siding. But once you set foot inside the meaning of the term painted church becomes overly clear. The interiors of these 20 unique chapels are ornately decorated in colorful brushstrokes ranging from vibrant and playful murals to faux-granite patterns cloaking wooden columns. Each church has its own character, and each is truly a work of art.

My outing took place on a whim on a Sunday around noon. I was at first hesitant about my timing (Sunday, churches...yeah that), but I set out knowing that, if nothing else, I'd at least be rewarded with a pretty springtime drive through some of my favorite country roads in the state of Texas. As it turned out, Sunday is a perfect time to visit. The churches were all relatively empty and, with the exception of Saints Cyril and Methodius, completely open to the public. Although I would have appreciated running into some locals to borrow a few historical tidbits, the vacancy of the churches offered a uniquely private and intimate experience.

Due to geographical reasons, I limited my first visit to only 3 of the churches in Fayette County - Nativity of Mary, Blessed Virgin Catholic Church; St. John the Baptist Catholic Church; and Saints Cyril and Methodius Church.

Although I am not deeply religious, I found the churches historically fascinating and architecturally inspiring.

Below are brief accounts of what I encountered and photos I captured at each church:

Built in 1906 and designed by noted Texas architect Leo Dielman, this parish is known as the Queen of the Painted Churches. The intricately painted vaulted ceilings were, to me, the central feature, but the 100+ year-old stained glass windows were equally impressive. The entire interior is intricately ornamented and masterfully painted. The confession booths in the rear of the church were a surprise to me, as well as the numerous depictions of the crucifixion. 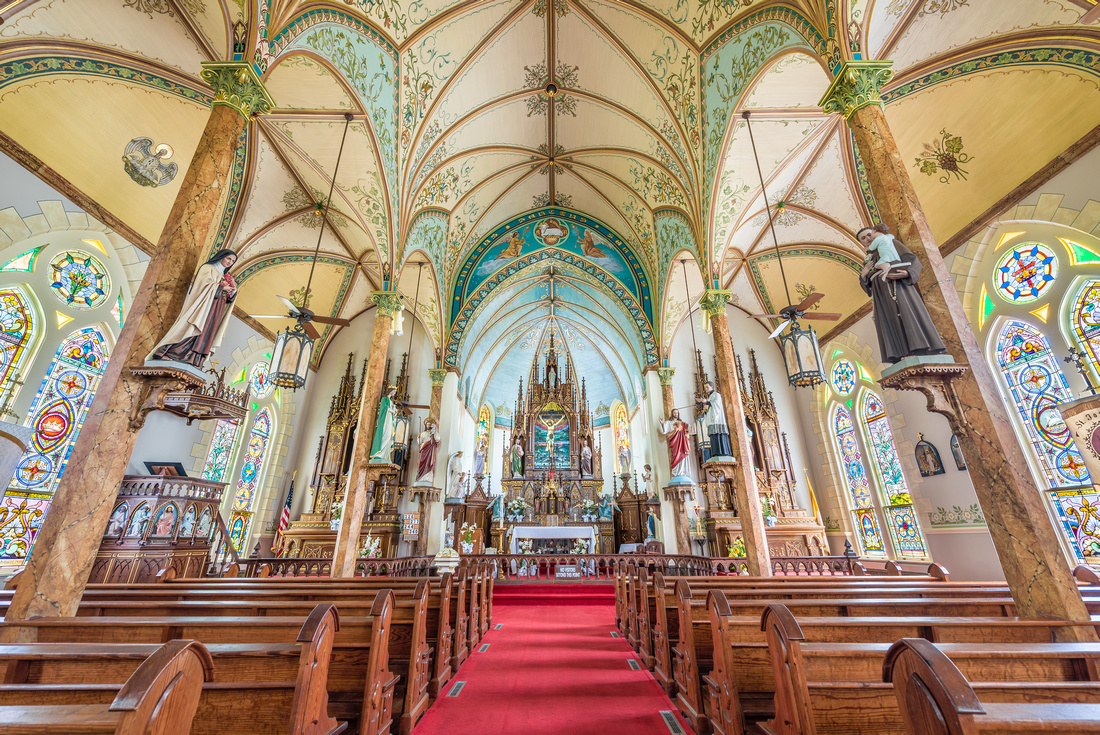 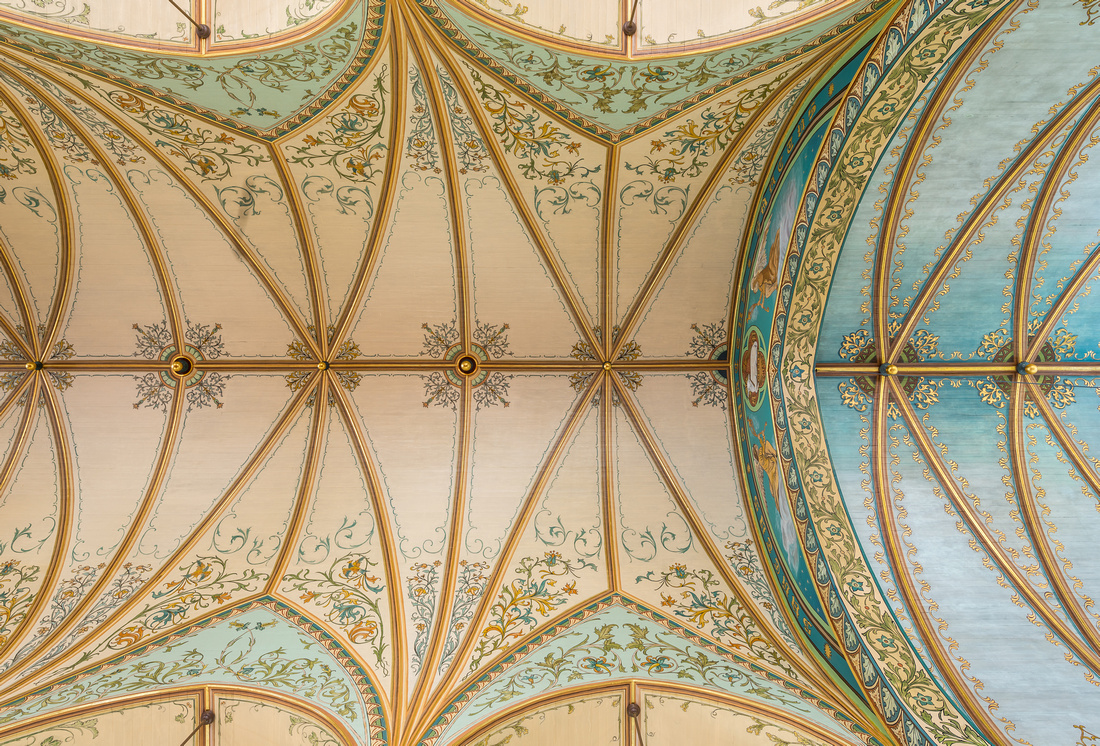 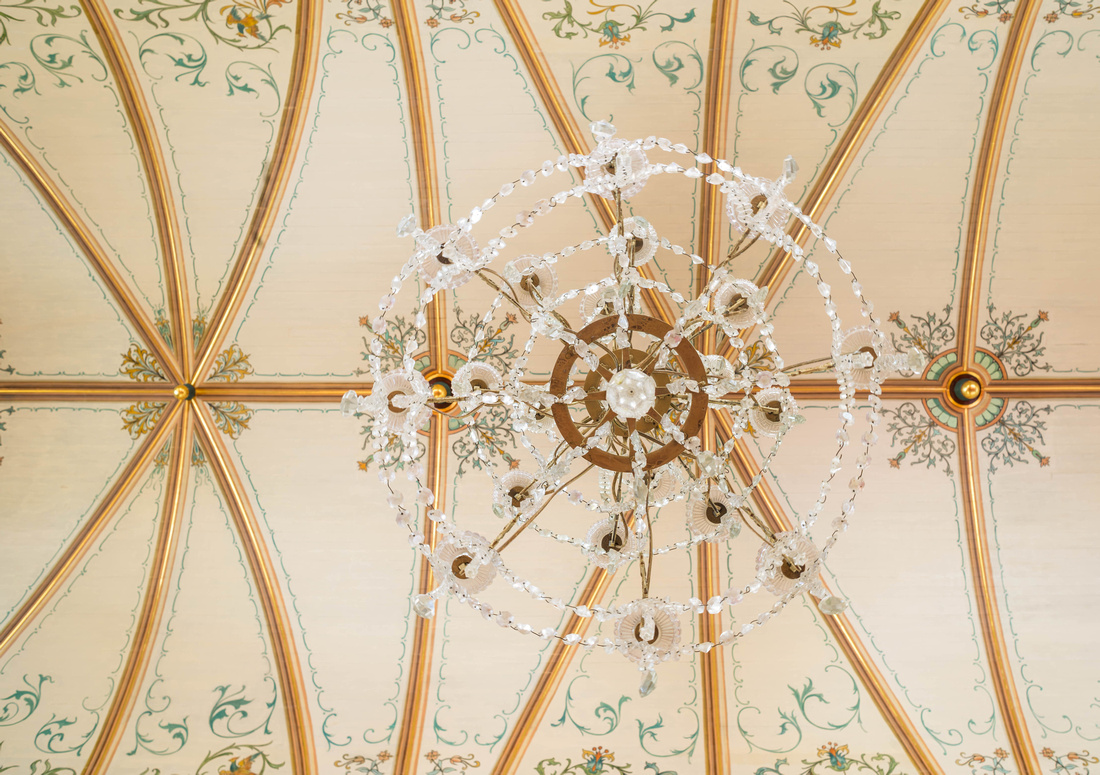 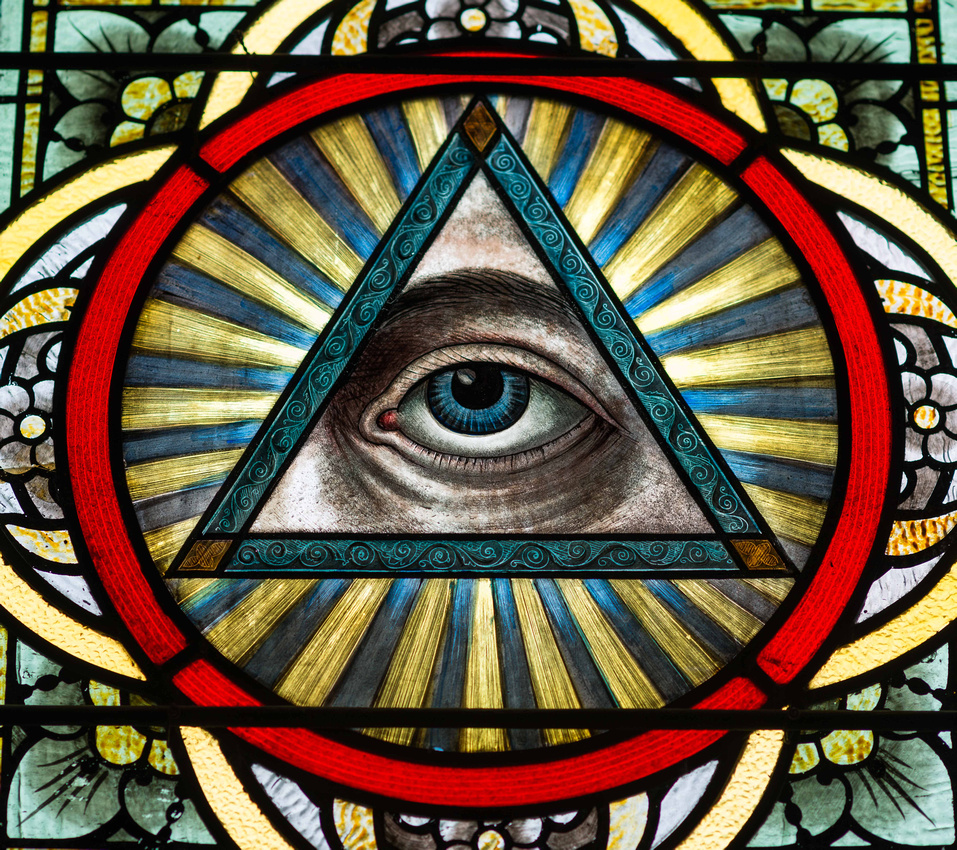 After the Ammansville settlement's first two churches were lost to a hurricane and fire in 1909 and 1918, respectively, one may have expected the locals to give up. Instead they persevered and, in 1919, erected a third church which still stands today. Aptly known as 'The Pink Church', the interior surfaces conjure up images of cotton candy. Although I didn't encounter anyone at the church, candles were still burning near the altar. An old graveyard lies adjacent to the church. 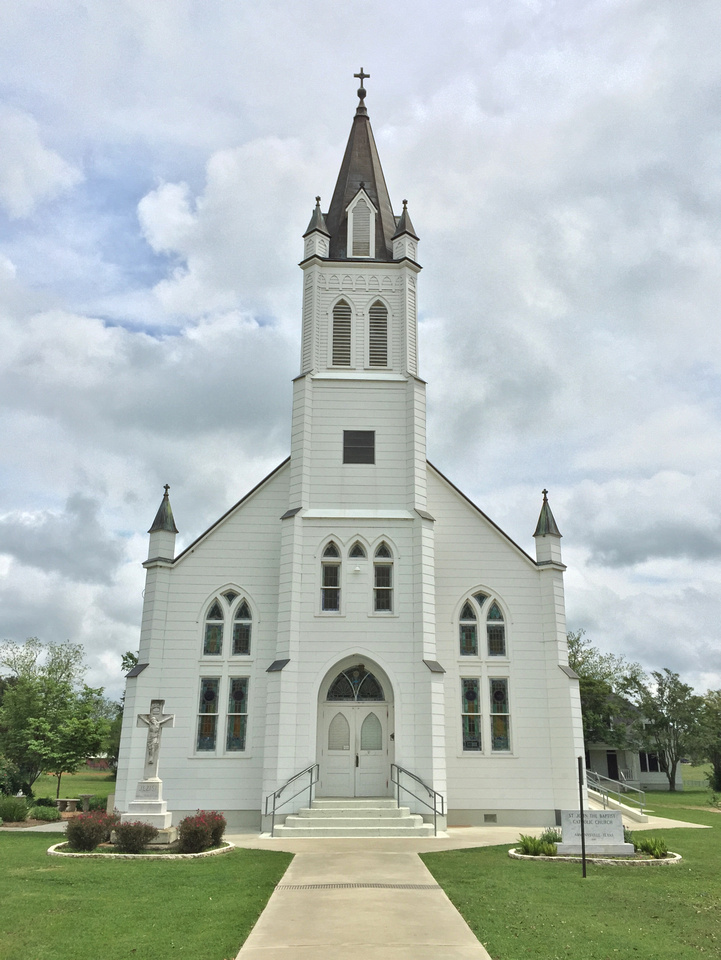 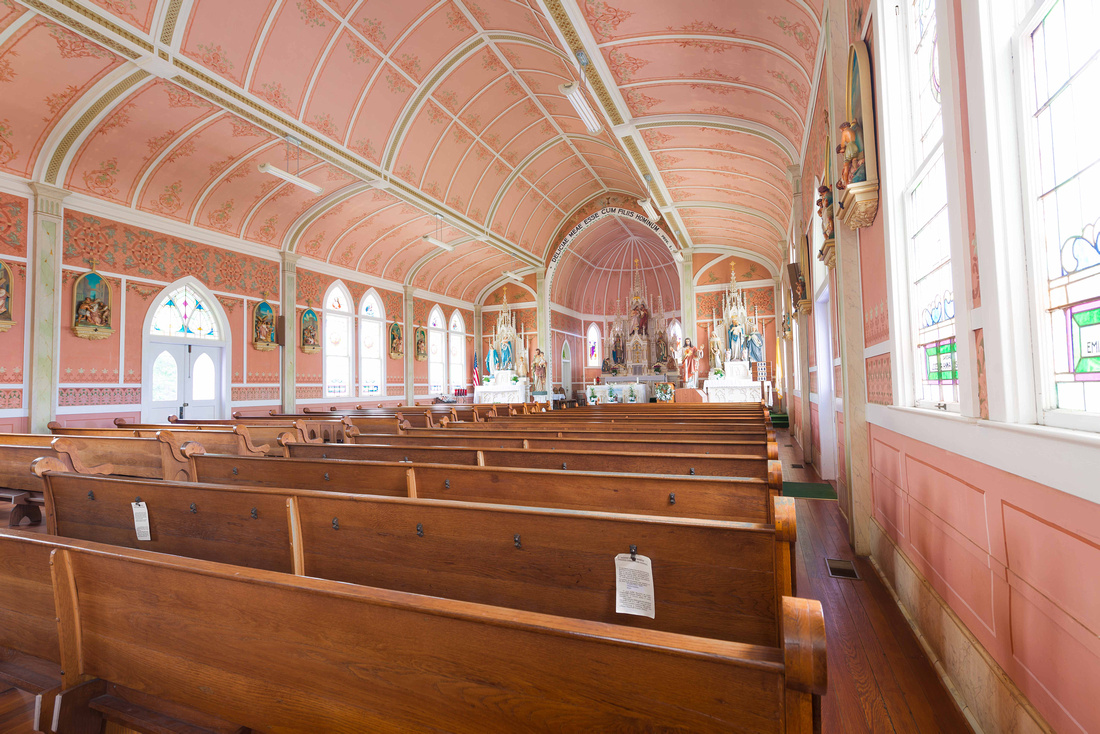 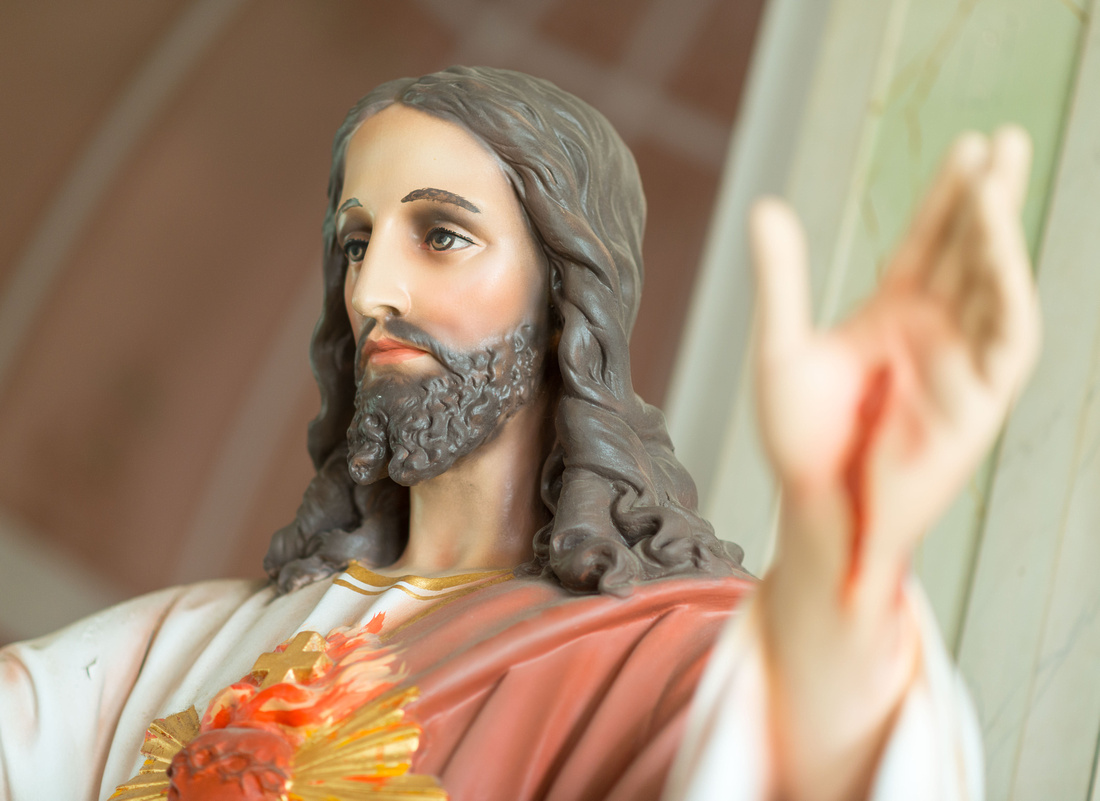 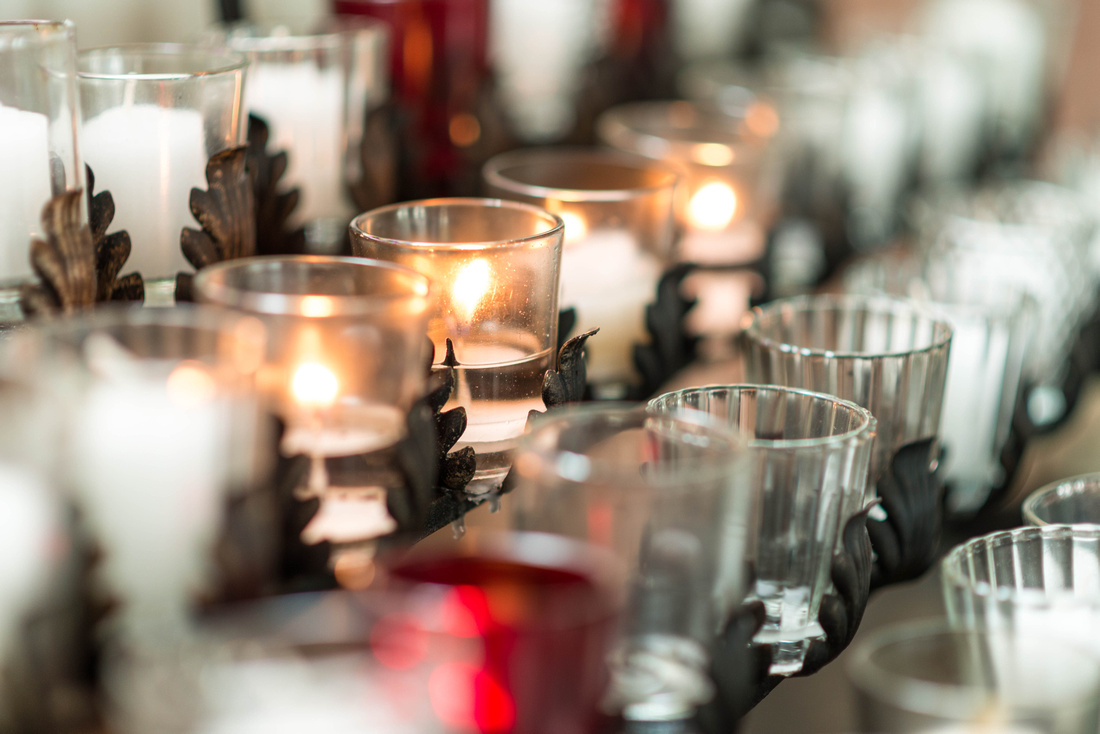 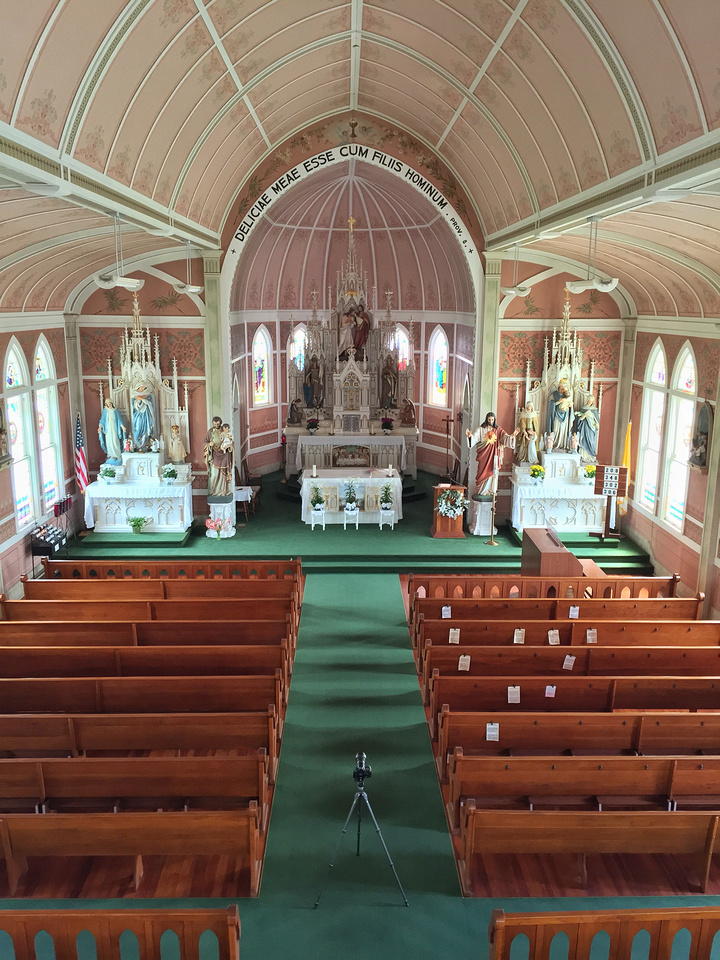 Dubina's first church, built in 1876, was destroyed by the same 1909 hurricane that took the first Ammansville church. Soon after, in 1912, this church was erected in its place and survived a fire that destroyed most of the town. In Czech the word dub translates to oak grove, and surely some of the oaks in the area were alive to see the church's construction; there are a number of enormous old oaks in the direct vicinity. The front doors were open, but a locked gate stood directly inside. Of the three churches I visited this was definitely the most colorful, and I wish I could have gotten a better look inside. 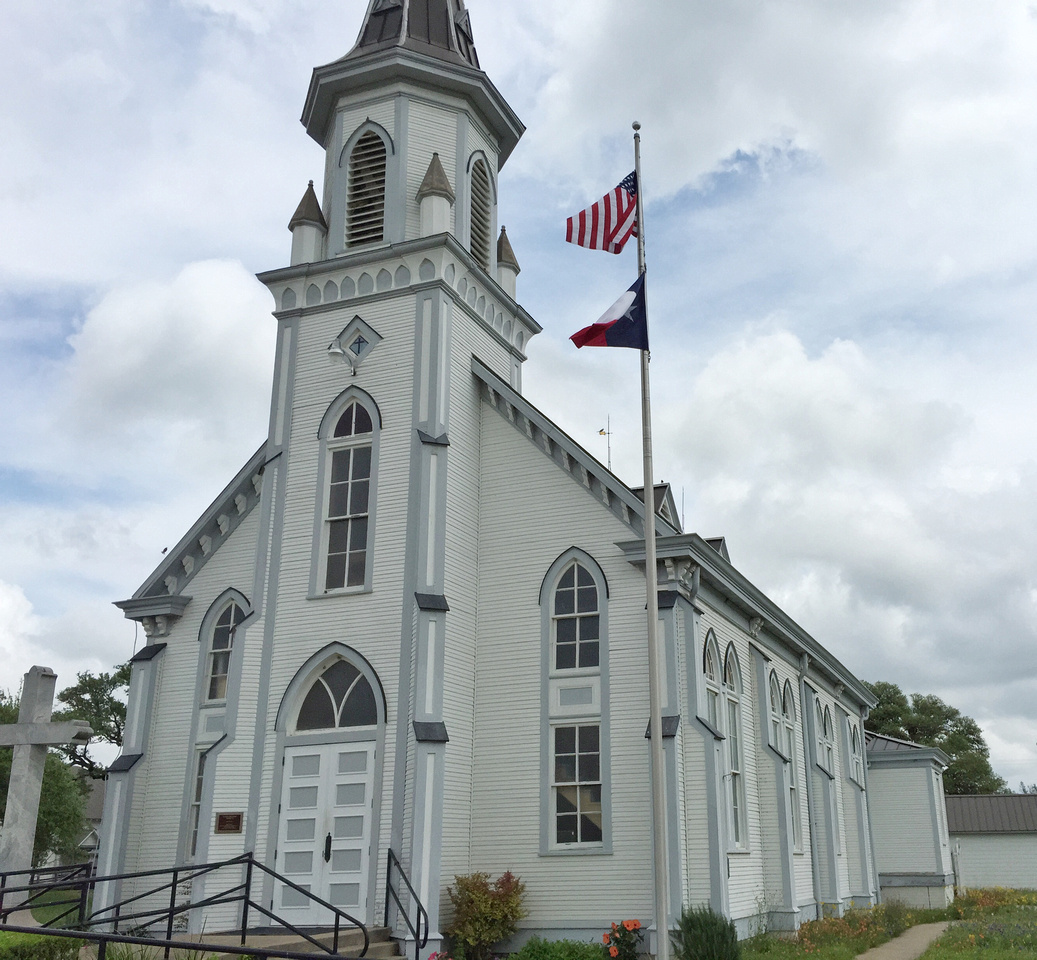 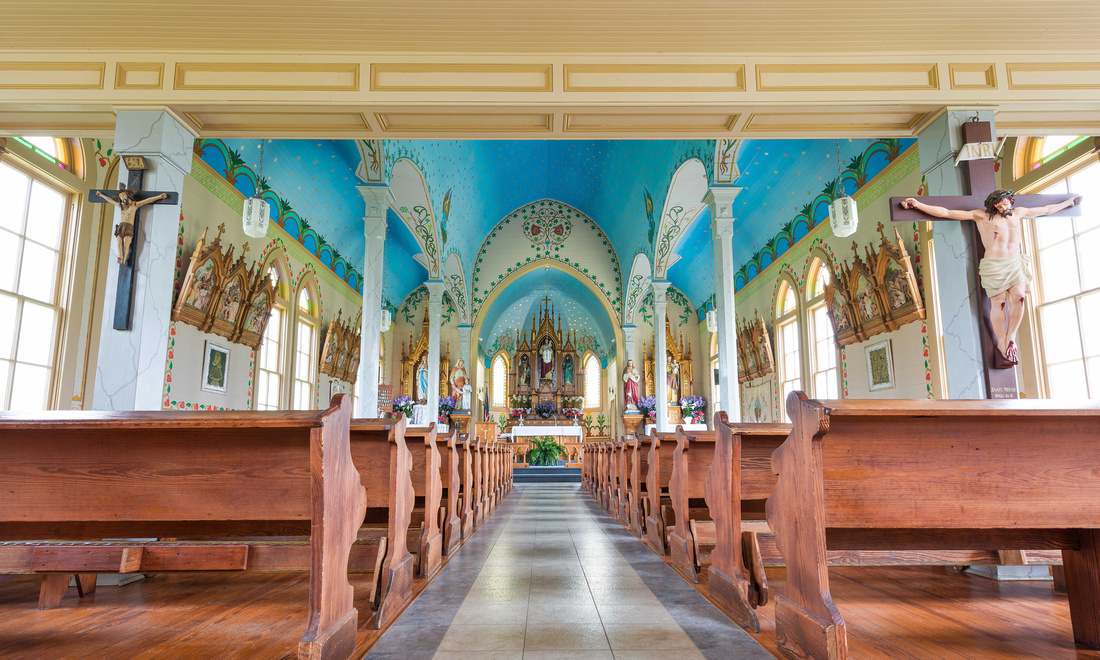 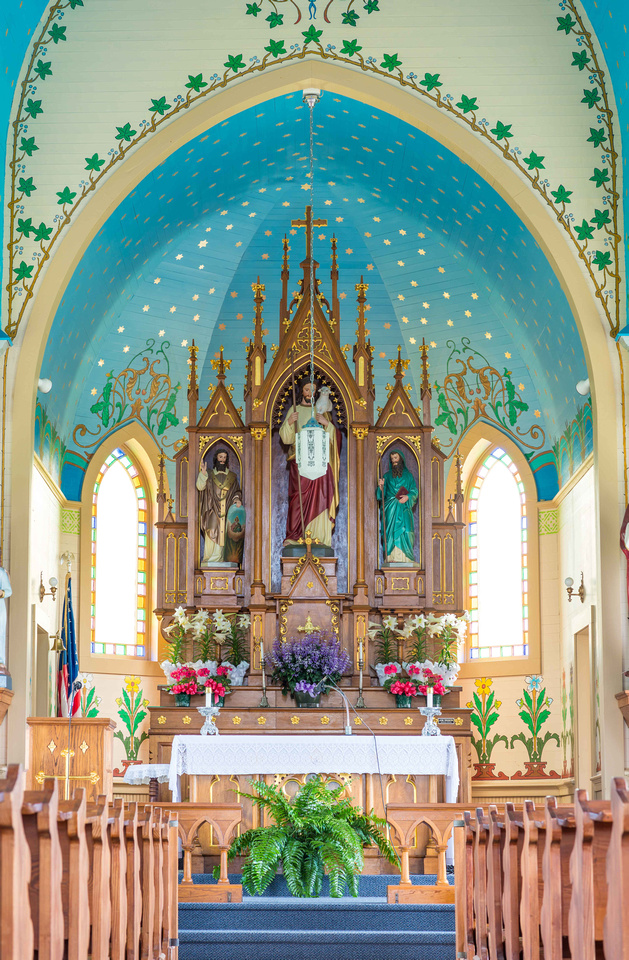 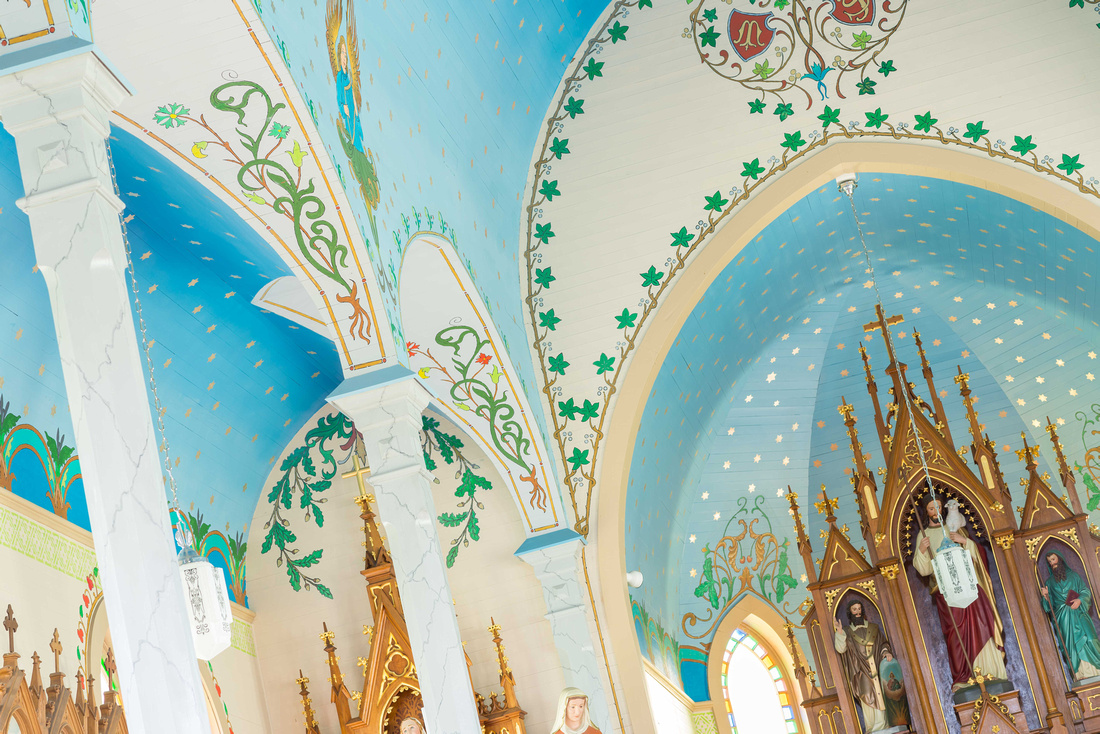 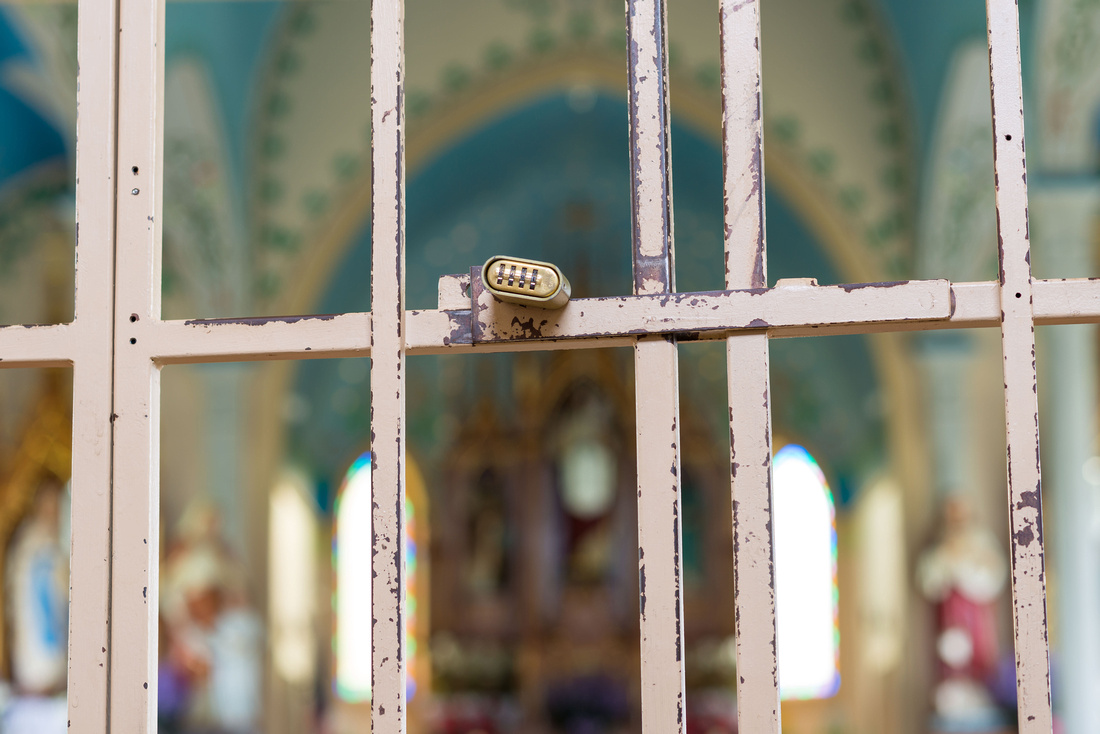 Maria Soto(non-registered)
These churches are beautiful
Penny Siegel(non-registered)
Would love to visit are there any r v parks there
Schulenburg Chamber of Commerce(non-registered)
Just FYI: The churches are all active churches and do not encourage visiting on a Sunday unless you are attending Mass. In 2005, Schulenburg was named the Official Home of the Painted Churches by the Texas State legislature. The Schulenburg Chamber gives guided tours of the churches and gives 40% (sometimes more) of the tour proceeds to the churches. The churches are typically open from 9-4 Monday through Saturday, except for certain holidays and holy days.
Valerie(non-registered)
You also might want to check out the chapel located on the campus of Our Lady of the Lake University in San Antonio, and the Catholic churches in the Polish settlements of Pana Maria, Czestochowa, and Koskiusko, Texas. Interesting histories in those three towns, too.
Tracy S. Ebarb(non-registered)
you need to make a trip to west TX, to Olfen, absolutely exquisitely painted Church, south of Ballinger, far off the beaten path
No comments posted.
Loading...
Subscribe
RSS
Recent Posts
All New Travel Photos Aerial Gallery Now Live The Photographer's Guide to Trekking Everest Base Camp The Real Ha Long Bay Inside Hanoi: 10 Tips for Photographers Recap: June 2016 Photo Safari Recap: Heart of Tanzania Photo Safari Witt Pit: The Best BBQ Joint You've Never Heard Of (that happens to share my name) Choosing the Right Lens(es) for a Photo Safari Battle-Proofing Your Tripod
Archive
January February March April May June July August September October November December
© Witt Duncan
User Agreement
Cancel
Continue